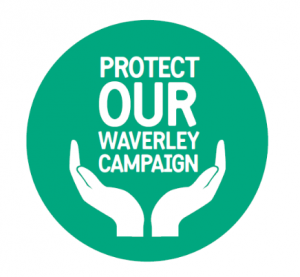 Protect Our Waverley (POW) confirms that it lodged a legal ‘Section 113’ challenge in the High Court on Thursday 29th March, against Waverley Borough Council (WBC) and with the Secretary of State as an interested party, regarding the policies on housing targets contained in its Local Plan Part 1. The Plan was adopted by the Council on February 20th following a recommendation by Government Planning Inspector Jonathan Bore.

The challenge is that transferring a significant amount of Woking’s housing need to Waverley fails to take account of Waverley’s unique environment with its Areas of Outstanding Natural Beauty and Sites of Special Scientific interest. The resulting target of 590 homes per year has implications for the whole Borough, and gives no certainty that the affordable housing, so desperately needed, will be provided where local people actually want to live or where infrastructure exists to support them sustainably. POW has campaigned throughout for a properly sustainable Local Plan for Waverley and makes it clear that the current challenge is specifically against the housing target and allocations, and not the whole Plan. Pending the outcome of the challenges, the adopted Plan still has force and POW is pleased that its use in resisting even further unsustainable development will continue. However, it remains vital for the whole Borough that the unreasonable increase in the housing target is brought back to sustainable levels for the next 15 years.

Bob Lees, Chairman of Protect Our Waverley, said: “It is most regrettable that POW, along with others, are having to challenge the unwarranted imposition by Inspector Bore of an unsustainable increase in housing to be built over the next 15 years. Common sense tells us that people who want to live in Woking do not want to live in rural Waverley. So why should Waverley have been forced to accept 21% more new homes purely on the basis of Woking’s ‘unmet need’? This challenge to Inspector Bore should properly have been made by Waverley Borough Council itself, at the time of the Public Examination, but they stayed silent despite having themselves challenged Woking earlier in the year. Had they done so then the extra houses wouldn’t now be required and neither would the challenges by POW and others.”

He added “In making this challenge, we have listened to people across the Borough who are now realising the full impact of the higher housing target imposed by Inspector Bore on their own localities. Even many Councillors speaking at the adoption of the Local Plan in February acknowledged it was a bad Plan. All agree that infrastructure in the Borough is inadequate but WBC has ignored this. We are saddened by how the Waverley administration views people who raise legitimate concerns and represent the interests of huge numbers of its residents, whether expressed through Parish Councils, campaign groups or other local bodies.”

1. Protect Our Waverley Campaign
Protect Our Waverley Campaign is a group formed to campaign against the development of Dunsfold Park New Town on the Dunsfold Airfield and other unsustainable planning applications throughout the Borough of Waverley. The campaign is managed by POWCampaign Ltd. For information about POWCampaign please see the campaign’s website
www.powcampaign.org
and its companion website
www.dunsfoldvillage.co.uk